Ringing In 2015 With Paintings Sold And Magic 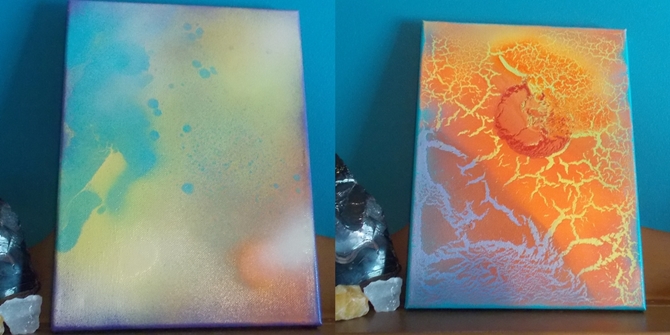 Photo By Me, Cheryl Larkin Of Paintings I Created

2014 ended on a great note for me as I logged into email on December 31st and had notice that I once again sold two paintings. These paintings both went to the same person and I love the contrast of the soft muted one done with a Shaman Stone combined with the the bold bright one done with Orange Calcite.

I think 2014 was a great year for me artistically, getting the ETSY store up and running and filling it with paintings. It took a while to get it all tweaked but once I did things have moved along easily. I think for my first year with little promotion done I have had a good amount of sales. I plan to promote better in 2015 and add some new sizes and maybe even some different type of energy art so I see great things in my future.

Later in the night just before midnight the magic began as it started to snow. I know this may not be a big deal for most people but here in Tucson, snow is not commonplace. But snow it did, right into the new year and throughout the night. Many Tucsonans spent New Years Day playing in the snow. A rarity for us, for sure.

I do not like resolutions but I do choose a word for the year to focus on and guide me. In 2014 my word was Create, and it guided me beautifully throughout the entire year. In early December my word for 2015 chose me and that word was Magic. Then to have the Universe snow in the New Year just solidified the fact that Magic is the right word for me for 2015.

I can feel the magic in the air all around me. I am so excited to see what 2015 brings but I know it will definitely be magical for me. I have my goals and my plans and my attitude that what will be will be and I am ready to see what unfolds.

Happy New Year to all. Embrace the magic that floats in the air and enjoy all that life has to offer.